Now that you have your robot all assembled, the first test should be to try driving it around manually by using either a keyboard on your workstation or a logitech controller.

Connect to your robot and log in, following the instructions in Connecting the Robot to Your Network. Log in to the robot from an ssh window, as before.

After logging in, the magni_base program will be running under ROS. To verify this, type:

Next, start the keyboard teleop program. In the ssh window, type:

This will launch the teleop program in the robot. There will be a screen that shows the commands in a sort of crude graphical way.

Because the robot has a ‘dead man timer’ you must rapidly continue to press keys or the robot will automatically stop as a safety measure. Sometimes due to spotty wifi connectivity the received commands may be too slow and you may see the robot do jerky movements but that is the deadman timer kicking in for too slow of a rate of keypresses.

The robot will respond to keystrokes as follows:

Running teleop-twist from a workstation

As of right now you’re running the teleop node on the actual robot, and as such are sending keypress packets through the SSH tunnel to the robot. To run the node on your workstation and send messsages through ROS sockets, then you’ll need to first connect to the robot as a workstation and set it up as a ROS master.

You’ll also need to install the actual teleop node in order to run it:

There is no major difference in running the node locally, however the principle is a good starting point and test for more advanced usage.

A standard Magni Silver equipped with a Raspberry Pi with a stock Ubiquity Robotics SD card image is by default set up to work with a Logitech gamepad Controller out of the box without bothering to connect via laptop over a network. In particular the robot is tested to work with the logitech F710 controller that is widely available. It may work with other similar logitech gamepads although these are not officially supported.

You can test this by using the Joystick and seeing if the robot responds to commands. For safety sake, raise the robot’s wheels above the floor first. (SAFETY TIP).

If the wheels don’t move, check the troubleshooting section further below. 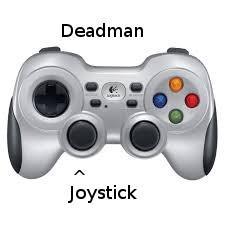 To operate the controller, hold down the deadman button (LB) and move the joystick.

The controller is set to be very slow. You can increase the speed by using the (LT) button below the deadman, this will increase the maximum speed by about 25%. Moving the joytick to a position between full up and full right will move the robot in a curved path.

The Logitech F710 is an approved joystick controller for the Magni robot. The default scale for the joystick is 0 to 1.0. Output values can be found in the file /opt/ros/$ROS_DISTRO/share/magni_teleop/param/logitech.yaml. The values most commonly modified are these:

If nothing happens, you’ll need to go back to the unboxing section and check to see if the robot is gettting power, the MCB is working and you can connect to the robot via a network (see connecting to your robot for the first time.) Check to see that your dongle is installed in the Raspberry Pi, there are fresh batteries in the Logitech Controller, and there is power going to both the Raspberry Pi and the motors. If the LEDs and the power switched are lit, you can additionally test to see if the wheels resist being turned.

Next, see if you can connect to your robot using access point (AP) mode:

(See the section on connecting to the robot.)

the robot responds by giving you its IP number. Type Control-C to kill off the ping command.

Then use the following command to login to the robot for example from a laptop networked:

You may get asked to authorize your key, say yes.

To see if the joystick is running, type:

If you see /joy you are good to go!

If you don’t see any topics you need to launch the logitech on the robot:

Shows everything is running. You now should be able use the controller to drive the robot.