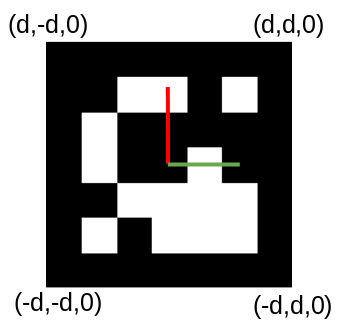 This is an aruco marker. Its a little square image, that like a QR code contains an identifier encoded in the pattern of the marker. We use this type of marker a lot on our robots and you’ll encounter them again when you get to the navigation system description. With fiducial follow running the robot continuously searches its field of view for a specific aruco marker (number 49 by default which is shown). Because the marker is a pre-set size and has a pre-set orientation the robot can figure out how far away it is and even which direction it is pointing!

Warning: Magni is a big powerful robot, be really careful about putting a marker in front of the robot. With fiducial follow running you should:

Read the above warning and then download and print the following marker:

A paper marker works just fine, but for best results the marker should be kept square and perfectly flat. You can do this by mounting the marker on stiff cardboard or anything flat. We always mount our fiducials on foam core. Its available at most print shops.

Put the fiducial away and close all windows on your computer that have a fiducial on them before you do the next step.

Log in to the robot as per the instructions in the section on connecting.

Once you are logged in to the robot make sure the robot software is running by typing:

Then type the following command:

This starts the processes that you need to make fiducial follow work.

Then you can take the fiducial that you printed and put it in front of the robot. Usually the robot will move as soon as it detects an image of the fiducial. The robot can move back and forward. As you move the fiducial around the robot should follow you.

Common problems are the camera not working. If this is the case check to see if the camera is working by running the command:

If there are no errors the camera is working.