The robot ships with a Raspberry Pi computer, usually the Pi 4 4GB Model. 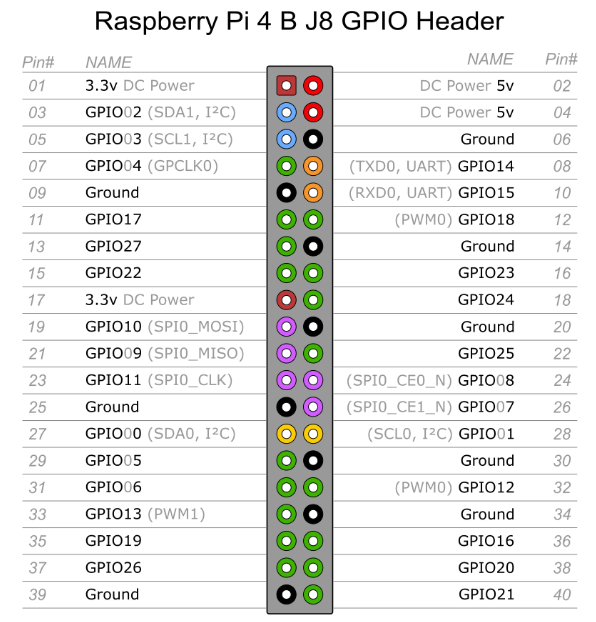 You must remove the battery cables when working on the boards because live battery voltage is on the board and on P702! Powering off the Magni will not prevent the live voltages!

There are many GPIO lines used for features of Magni that could also be re purposed for your own needs if that is required. The most logical way to use these lines is use a custom 50-pin ribbon cable that would normally go to our Sonar board on jack P702. You could then make a custom board to attach to lines of this connector as long as you make sure the lines will not be used by the Magni software.

The first 40 pins of P702, the 50 pin Sensor Board connector, are the same pin numbers as the Raspberry Pi 40 pins on P701. Pins shown in the tables below are therefore used on both of the large dual row connectors on the Motor Controller Board.

This page explains the GPIO line usage and how to disable features if you need to use the lines yourself.

There are a few lines that if you are using our robot you must let our system use these lines even for the base product with no options like sonar board and so on. The lines in the table below are reserved for usage by our ROS motor_node to control the main board called the MCB board from the Host CPU (usually the Pi).

If you do not use the Sonar board OR are willing to sacrifice the features for two of the inputs and two of the outputs for leds for Magni Silver and Magni Gold here is the information required.

You can use P704 and P705 jacks which have one GPIO each after disabling the usage of these by Magni because by default they are for two switches on the Sonar board. Normally those 2 jacks and their Magni usage AND two other GPIO pins used to drive LEDs that exist on the Magni ‘Sonar Board’ are controlled by Magni. The first 40 pins of both jacks are identical but notice carefully each pin one as they are not aligned and it is tricky because the Raspberry Pi is plugged in to P701 making the pin numbering a bit ‘upside down’.

Always remove the battery cables so no live voltage is present on P702!

To use these as GPIO you must edit two files as root Edit /etc/pifi/pifi.conf:

Edit /boot/config.txt (be very careful to ONLY change the one line) Remove the one line shown below and save the file

To be able to drive the 2 LEDs on the sonar board yourself or just use GPIO 5 and 25 when there is no Sonar Board you will need to edit /boot/config.txt and comment out ‘dtoverlay=ubiquity-leds-buttons’

Doing both of the above changes frees up the 4 GPIO lines for your purposes and you should also configure them as your application requires.

Pin 3 of both jacks is 3.3 volts on the Raspberry Pi if you need that for your sensors keep the current usage low. Do not short this pin to ground! Starting with MCB rev 5.2 there is an onboard 3.3V regulator so the MCB can power some of the 3.3V chips like serial line buffers and the OLED display without use of a Raspberry Pi supply. The onboard 3.3V regulator does not connect to the pin 3 lines of either jack.

There are many other GPIO lines used for the sensor board. If the sensor board is not in use you may ensure the configuration is not trying to use the Sonar board and then the GPIO lines would be available for your own use. To use the lines you must disable the sensors.

The Sonar Board uses many GPIO lines that are shown the table below and again the pin numbers on P701 and P702 are the same for the first 40 pins.

Here are 5 more GPIO lines that are not in use at this time that we have plans for in a future IO board. Because the board does not exist today and because GPIO lines are in such high demand we will list them here. When we used these in the future there will be specific lines in a config file to enable usage of them that will be off by default so these lines can be considered usable at this time.

Starting in mid 2020 we started to ship the Raspberry Pi 4 host computer that is inserted into the MCB board so that only the bottom is visible and even that is hard to see due to the robot chassis. The easiest way to tell which general Raspberry Pi you have (3 vs 4) is to look at the USB and Ethernet jacks as follows.

The best identification is to use this linux command from an ssh command line shell into the robot which will also show the rev of the Pi.

NOTE: The Rev 1.4 and 1.5 Pi 4 were released recently and change the way the bootloader behaves, as such they may not be supported by all images.